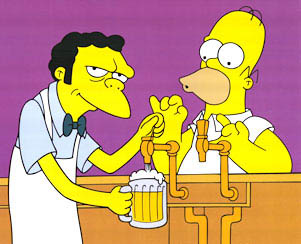 Little known fact:  Christopher Collins was the original voice of Moe the Bartender on Season One of The Simpsons before Hank Azaria took over in Season 2.  Did a dispute over money lead to his departure from the show?  We may never know, but as many former Simpson's stars found out, the only way you really leave the show is in a body bag!

Special Thanks to Alex Gibson for this one!